The emergence of high-throughput data in biology has increased the need for functional in ‘silico’ analysis by developing integrative bioinformatics tools.

DoriTool, is a comprehensive, easy, and friendly pipeline integrating biological data from different functional tools with the aim of maximazing reproducibility, facilitate the obtention of biologically meaningful data and reducing the working time of the researchers, especially those with limited bioinformatic skills.

DoriTool is, the most complete bioinformatic tool offering functional ‘in silico’ annotation of variants previously associated with a trait of interest, shedding light on the underlying biology and helping the researchers in the interpretation and discussion of the results at mutation/variant level, Gene level; Pathway level and at Network level, by combining up-to-date functional and genomic data integrating also third-party bioinformatics tools in a pipeline. DoriTool uses GRCh37 human assembly and online mode.

Here we show also DoriTool functionalities by applying it to a dataset of 23 variants associated with drug addiction.

Read TROUBLESHOOTING.md file in case you are not able to run DoriTool

Run one of these scripts with the next parameters

There are two ways to specify the input file (-- file, -i file )

3.3. Variant annotation analysis with eQTLs (--GTEx , -e). Notice that the specific human tissue required must be downloaded previously from https://www.gtexportal.org/home/

DoriTool allows performing a functional ‘in silico’ analysis at 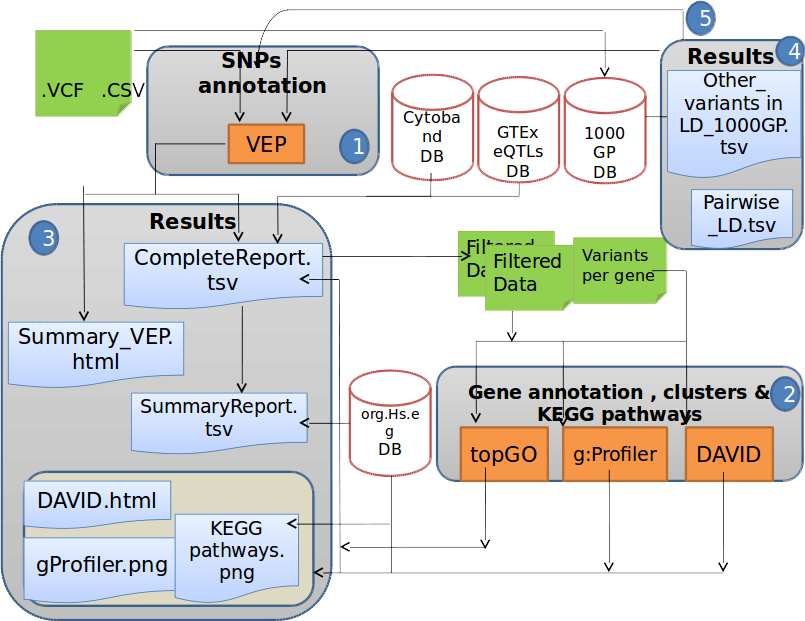 Schematic diagram of the DoriTool architecture. The workflow starts with an input file (VCF format, list of chromosome positions of the variants and their alleles or list of variant rs identifiers).

1) Variant Effect Predictor annotates the input variants with the tagged gene, the impact and some annotations described in the main text, querying Ensembl database. The next step involves locating the variants in their corresponding cytobands, and the user has the option to query the GTEx database locally by providing a tissue-specific file with the eQTLs.

3) The main output files are the CompleteReport that contains all the annotations at transcript level provided by VEP, the SummaryReport that includes only felected information from the former, and collapsing the results by gene and effect in the transcript.

4) As an option, the user may ask for Linked variants in a window size of 500 Kb, with an LD cutoff specified in the main call.

5) In case the user has asked the previous task, a new CompleteReport profiling the linked variants will be produced.

DoriTool was designed for a post-association analysis (e.g., GWAS, NGS). Here we present DoriTool outputs by applying it in to a dataset of 23 SNPs related with drug addiction which were selected ad hoc to show the scope and the full potential of DoriTool.

Input variants are functionally annotated using VEP for the analysis, annotation, and prioritization of genomic variants in both coding and non-coding regions. VEP allows determining the effect of the variants (SNPs) on genes, transcripts and proteins, as well as regulatory regions, non-genic variants, and including transcription factor binding sites (TFBS), using regularly updated data files that are distributed by Ensembl and its output follows a standard form (VCF). DoriTool also locates each variant in its corresponding cytoband, retrieving the information from the database downloaded from UCSC hg19.

SummaryReport.tsv is a tab-delimited text file containing in each row, apart from the input information related to the mutation/variant, its consequence defined by the Sequence Ontology (http://www.sequenceontology.org/), its impact (high, moderate, low, modifier), transcript quality flags (cds_start_NF: CDS 5’ incomplete, cds_end_NF: CDS 3’ incomplete), the symbol of the gene tagged by that variant (considering a region of 10 Kb upstream of the TSS and 5 Kb downstream of the gene end), information regarding the transcription factor binding site (TFBS) related to the variant, the nearest gene in case of intergenic variants, the Condel score (i.e., a consensus score considering SIFT and PolyPhen-2, which ranges 0-1, being 0 neutral and 1 deleterious), the cytoband, the KEGG pathway in which the tagged gene was annotated and the Gene Ontology term.

The ouput file CompleteReport.tsv is also a tab-delimited text file containing in each row, apart from the information reported in the SummaryReport.tsv file, additional information as feature identifier and feature type (e.g., transcript, regulatory feature…), position of the input variant in cDNA, coding sequence and protein position of the input variant, changed aminoacid, codon change (the alternative codons with the variant base in upper case), existing variation (dbSNP or COSMIC variations), distance to the transcription start site, strand of the feature, source of the symbol (e.g., VEGA, Ensembl or HGNC) and HGNC id.

2.2) FGNet, which uses TopGO R package. topGO facilitates semi-automated enrichment analysis for Gene Ontology (GO) terms mapping the genes tagged by the input variants with the associated biological annotation terms (e.g. GO Terms), and then statistically examine the enrichment of gene members for each of the annotation terms on the basis of gene counts.

2.3) g:Profiler R package. g:Profiler performs Functional Enrichment Analysis, including transcription factor binding site predictions, Mendelian disease annotations, information about protein expression and complexes, statistically significant Gene Ontology terms, pathways and other gene function related terms. DoriTool manages the output given by g:Profiler as a visual report that complements and helps to interpret the results given by the other tools.

It is performed using three R packages: FGNet, which uses DAVID, org.Hs.eg.db, which maps Entrez Gene identifiers to KEGG pathways. For the DoriTool pipeline, we included a code to obtain coloured KEGG pathways considering the number of variants per gene by using KEGGprofile. 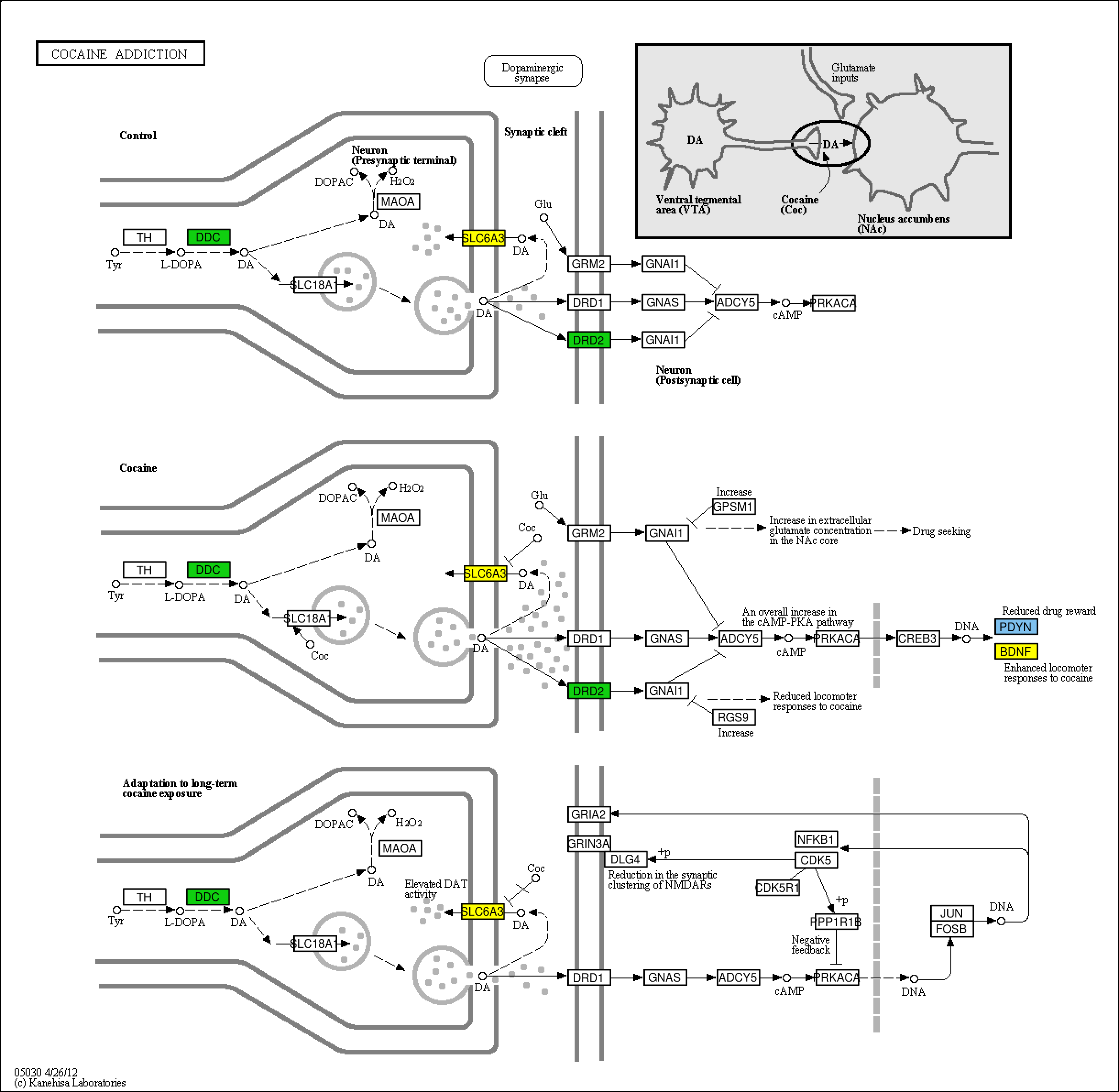 DoriTool also provides coloured Functional Networks of the list of genes tagged by the input variant list. These functional connections between the different genes were based on annotations (GO) and given by DAVID functions included in FGNet. Building functional networks provides an overview of the biological functions of the genes/terms, and permits links between genes, overlapping between clusters.

Figure 2. shows two clusters into gene-term groups in green (only one variant) and white circles (2 variants). Genes in solid colour have a unique cluster (and their color corresponds to the one shown in the legend), while genes with a white background are shared genes between clusters. The second shows the intersection network, which is a simplified functional network where all the genes that belong to only one metagroup are clustered into a single node. Clusters are represented by square boxes and genes are circles. 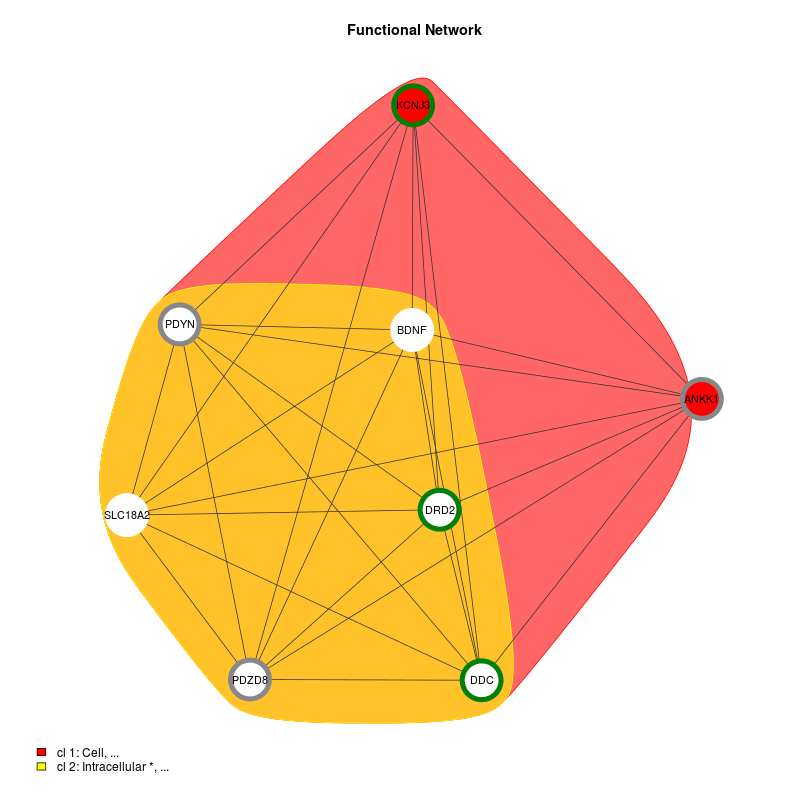 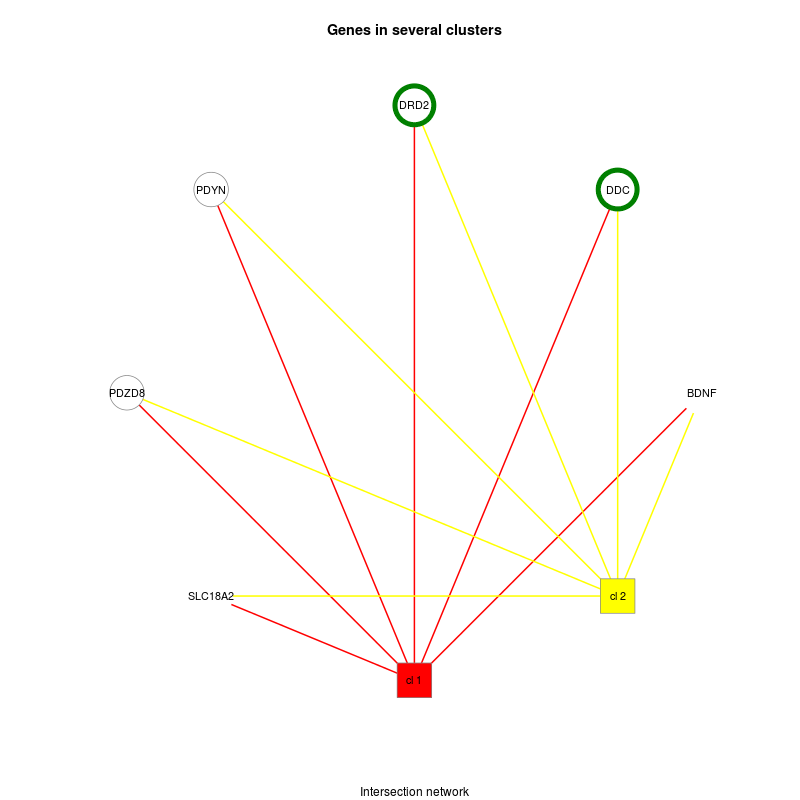 When using Doritool for a publication please cite as

Localization and support at: